In a testament to the meticulous filing records kept by our administration team, we have unearthed the very first “Report of the Committee of Management”, dating back to 1867-8. The report gives a fascinating insight into Victorian Britain, through the prism of our Cottage.

Appointed on the 3rd October 1867, the report states that “the committee lost no time in fitting up and preparing the Hospital for the reception of Patients”. The total expenditure attributed to the “Furniture, Ironmongery, Carpentry and Fitting Up” amounted to £113 19s. 6 ½d., a significant outlay relative to the £60 14s. 6d. received through donations. 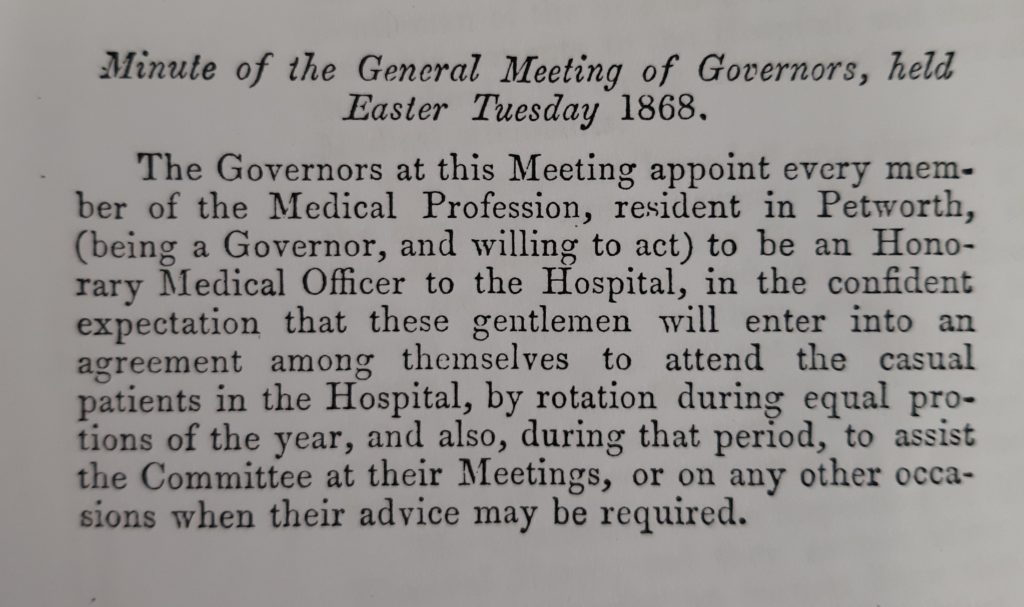 The first Patient admitted on 20th November, 1867 aged just 13 was listed as a labourer from Coates, Pulborough. Admitted with an “Injury to the Pelvis, from accident”, the report states that he was discharged on February 5th, 1868, having made a full recovery. A 68 year old Labourer was discharged in early February following a short stay after a diagnosis of “Carbuncle and Consumption”.

Not every patient was as fortunate; a 25 year old Painter from Petworth sadly succumbed to an “Abscess of the Abdominal walls”, passing away on February 1st, 1868 following a four month stay. 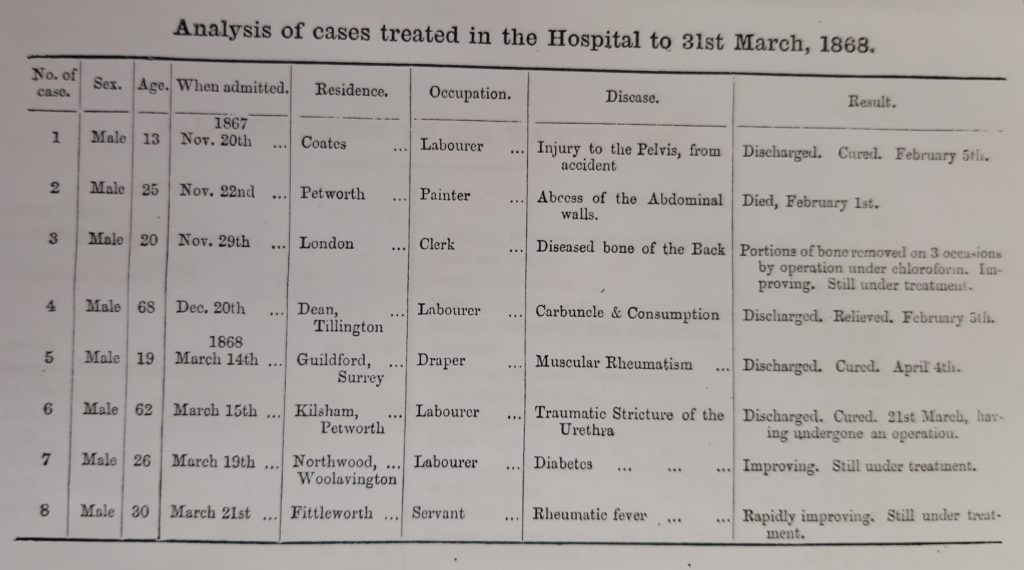 To be admitted to the Cottage Hospital, one must have received a letter of recommendation signed by a Governor and a guarantee by a “responsible person”. The rates payable to Patients seem remarkably contemporary vis-à-vis the discounts available to those less able to pay. ‘Class 1’ patients were to have their fees fully covered by the Guardians of the Union or Overseers of the Parish; however to be admitted as a Class 1 Patient one must have been signed off by a Poor Law Medical Officer.

The Poor Laws, most recently amended in 1834 by the Government of Lord Melbourne, were passed in order to reduce the burden upon rate payers, in an attempt to make life more bearable for those at the bottom of society. The amendment followed on from the 1832 Great Reform Act, that ridded Parliament of the corrupt “rotten boroughs”, and enfranchising many of the new cities borne out of the industrial revolution. 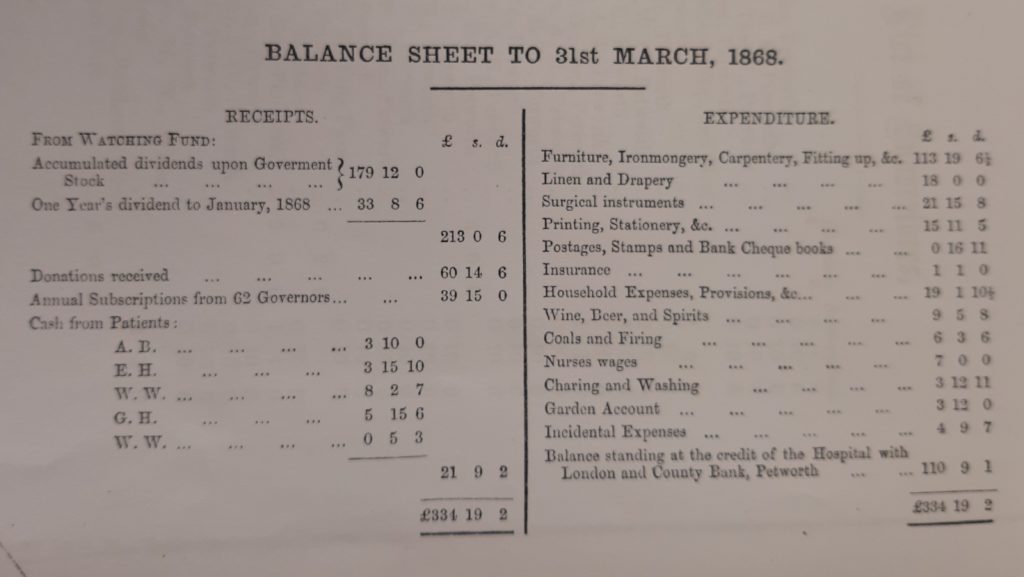 Patients were to supply their own medicines, however they were treated to “a suitable diet”. We are given an insight into what constituted a suitable diet by the balance sheet, which listed a spend of £9 5s. 8d. on Wines, Beers and Spirits. For context, just £7 was spent on nurses wages.

The report does highlight one significant difference between the Victorian cottage and our contemporary home. Whilst today we are bound by DBS checks and Social Services regulations, the original Cottage adopted a laxer approach to administration. The “rules …for the management and regulation” came into force after “a short experience of the practical working of the establishment”. This is to say, the first few patients were used as the trial run to test how best to run the home. 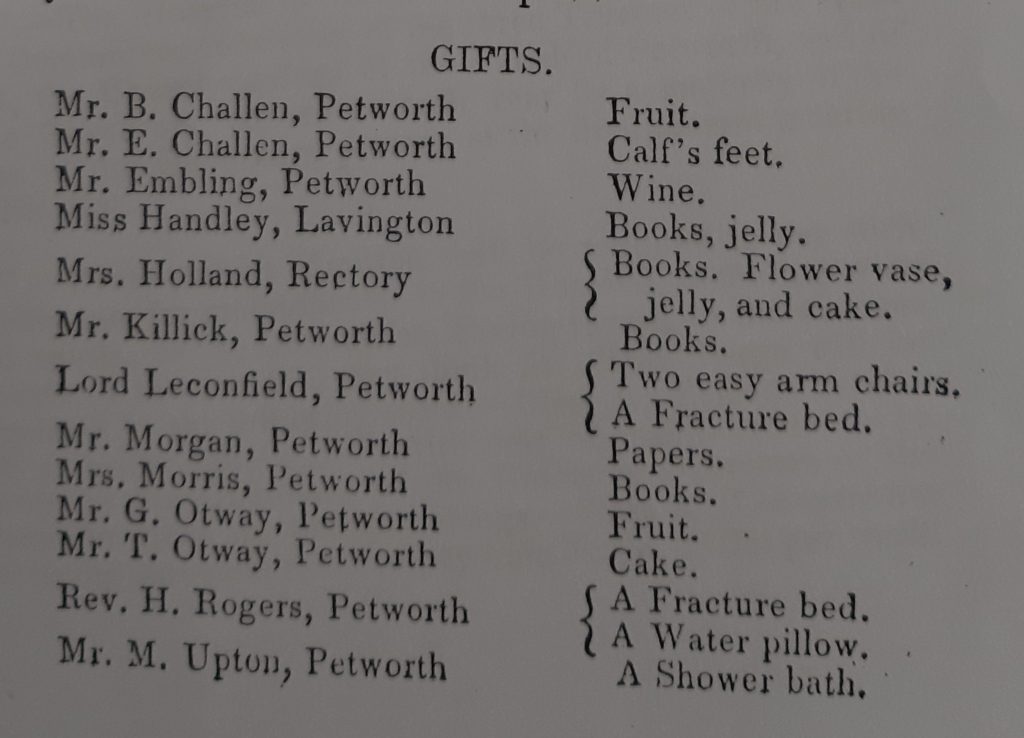 One major similarity remains however, and that is the greatly appreciated help from the community in the running of the Cottage. The report contains a considerable list of ‘Subscribers’ whose donations supported the Hospital. In addition to the generous monetary donations, the Cottage report also lists a selection of gifts. These range from fruit, books and wine, the sort of gift that we would still greatly receive today, through to the rather more bizarre, such as calves feet. Our Chef Daniel did not seem too keen to add calves feet jelly to the menu, so our residents will be pleased to hear that we are sticking to Fish and Chip Friday instead.