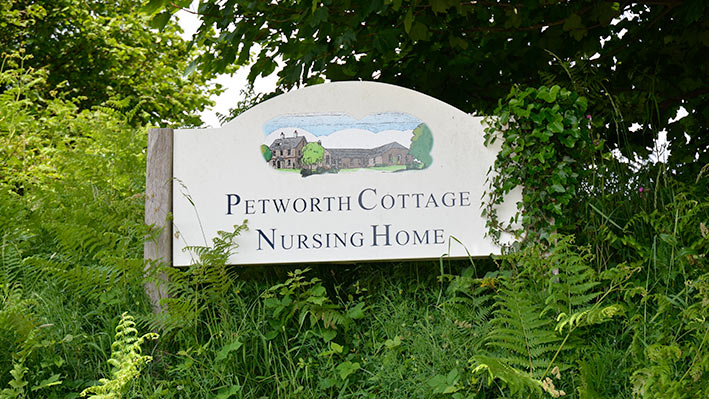 Set at the top of a hill overlooking the beautiful town of Petworth, Petworth Cottage has stood on the same site since 1867 when it was bequeathed to the community by the then Lady Leconfield. Originally set up as the local Cottage Hospital the home served Petworth and the surrounding area for many years until management of health in the United Kingdom was overhauled and the National Health Service was born. Not having the same requirement, the hospital was closed and the property put up for sale.

However, a then anonymous person, now known to be the late Miss Jean Courtauld, felt that there was still a need for such a hospital in the Petworth area and she purchased the premises and handed the property over to a Board of Trustees from the local area to open and manage a nursing home. Hence the beginning of the registered charity now known as Petworth Cottage Nursing Home and the first patients were admitted in 1974.

Times change and so do rules and regulations such as the need for all residents to have their own room and requiring all wards to be closed and it became harder and harder for such a small home of only 25 beds to remain viable. Thus in 2005 it was decided to upgrade and expand the home resulting in a major financial appeal for over £1 million. This appeal was generously supported by the people of the area. The original building was totally revamped and an extension added with additional bedrooms which all had en suite facilities. New kitchens were built and improvements made to all social areas. Now the home has 32 bedrooms and is able to take advantage of the outstanding views across the Shimmings valley. The upgrading continues every year as opportunities for improvement are identified.

Petworth Cottage now prides itself in offering a warm, caring atmosphere complemented by modern facilities. It offers a safe environment where a team of fully trained staff care and honour the individual needs of each and every resident. For many this will be the final stay in their life and the dignity of this is of paramount importance to everyone concerned. Effort is put into maintaining an environment as much like home as possible and people are encouraged to bring in small items of their own choosing to enhance their rooms. People visit whenever they wish and if desired pets are welcome.

The home offers a complete range of specialist nursing care covering a full spectrum of short term, long term, respite and palliative care. In keeping with the ethos of the area of Petworth, the fully trained staff are supported by a team of local volunteers who help to keep the home bright and cheerful with their offers of tea and coffee and their flower arranging skills. In addition there is a band of people who continue to raise funds for the home in order that enhancements and good maintenance can continue.

At a time when the media illustrates distinct problems in the area of nursing care and there is concern for anyone who needs such a facility, Petworth Cottage is proud to know that our reputation is high and that whenever we have inspections we are served with very good reports.

Thank you all so very much for the care and compassion you showed my husband during the last days of his life. He was treated with great respect and professional dedication. Nothing was too much trouble.

Thank you so much for all of your wonderful care and support you gave to both my Dad and Mum while my Dad stayed at PCNH. Dad was happy and that made it a little easier to cope in such an upsetting time.

The Friends of Petworth Cottage Nursing Home are a small group of enthusiastic local people who have been working tirelessly for many years to raise money for essential and specialist equipment – some of which is extremely expensive – to improve the care of all at the home. They also raise money for non-medical items to improve the comfort and well-being of the patients and staff.

The extensions and refurbishment which has taken place over the past few years was made possible by the Friends, who have raised over 2 million in various ways, including fund-raising events – often in locations provided by local people – and generous donations from local businesses and individuals.

These events have been many and varied and include the very successful bi-annual Winter Fair, the ever popular Christmas Quiz, the bi-annual Carols round the Christmas Tree, the annual Alfresco Lunch and various dinners, dances and other lunches and events etc. Their fund-raising efforts continue unabated, and the latest acquisition is a defibrillator which is now in place in the Nursing Home.

The professional nursing staff are assisted by a team of local volunteers who go in every day to provide patients with coffee in the morning and tea and cakes in the afternoon. In addition a team of flower volunteers go in weekly to make sure that there are flowers in the public areas and to look after plants and flowers in the rooms, thus creating a homely atmosphere enjoyed by both patients and staff.

New volunteers are always needed, so if you feel this is something you would like to do to help this worthwhile local charity and you have a few hours to spare each month, please do contact the nursing home who will be able to point you in the right direction.

We are always in need of a little extra help whether it be volunteer roles such as manning the tea trolley and arranging flowers, or nurses and care assistants who would like to join our staff or bank. If this sounds of interest, please use our contact page to send us a message and we will direct it to the relevant person.